Cycling Stance Width: What is it and Would I Benefit From Less or More? 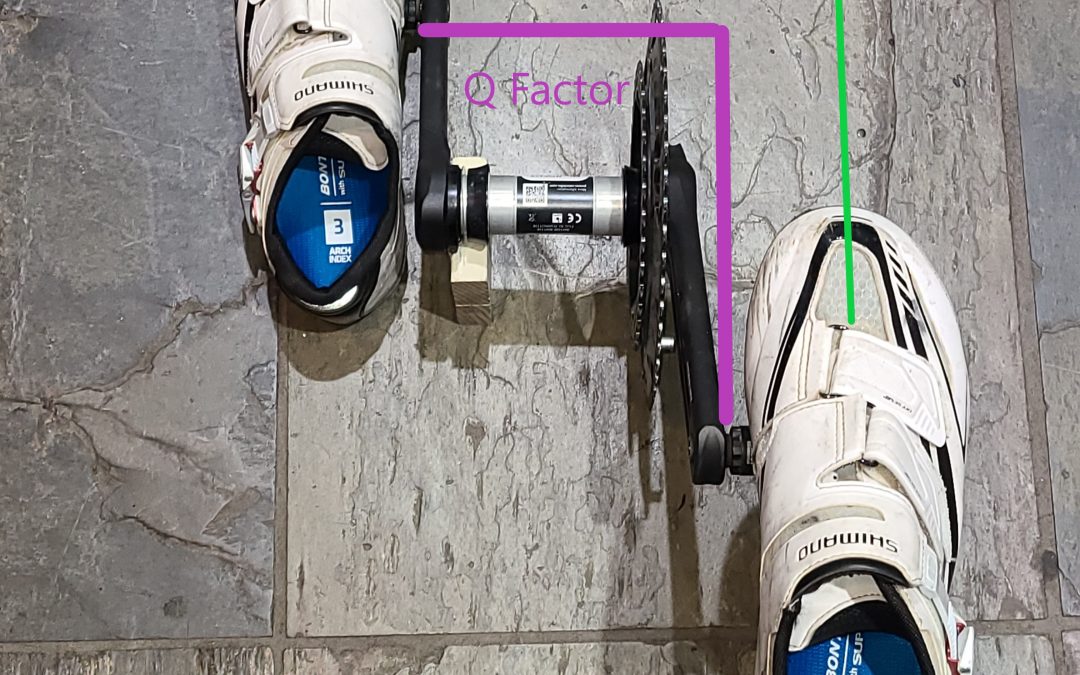 What is Cycling Stance Width?

How far apart your feet are when you pedal a bicycle is referred to as cycling stance width, and for some riders, this is an important aspect to adjust for an improved riding experience.  As humans we function in a defined range of motion when it comes to walking, running or riding.  Not everyone functions best with exactly the same stance width. In many situations a body has the capacity to accommodate a stance width that may be less than optimal without consequence or cost to joint health, muscle function, pain or performance.  But for some cyclists their preferred stance width is at odds with the stance width that is pre-determined by the bicycle and its parts, resulting in a series of compensatory movements and pressure points that detract from the enjoyment of cycling, decrease efficiency, and contribute to aches and pains.

Q Factor is a term used in the cycling industry to describe the horizontal distance from the outside of the crank arm to the outside of the opposite crank arm, where the pedals attach to the cranks.2 This is largely determined by a combination of the width of the bottom bracket shell, and resultant axle length and crank arm type used in that bottom bracket.  The Q Factor will be increased to accommodate wider tires in the frame.  Relatively speaking then, road bikes have a narrower Q factor than mountain bikes, and fat bikes have a wider Q factor than mountain bikes.  Q Factor has a direct effect on the achievable stance width of a cyclist but is largely fixed as a result of the bike design.

Stance Width is how far apart the feet are. The body is the reference.  It is not how far apart the pedals are, or the distance horizontally between the center of pedals – which is an equipment reference sometimes called stance width, but more correctly it is pedal width. This certainly affects stance width, but it is not the same thing.  Having said that, there is not an agreed-upon and common definition of stance width, or how and where (on the feet) it should be measured.  Stance width is an aspect of bike fitting that is under-represented in the research and is deserving of considerably more investigation. 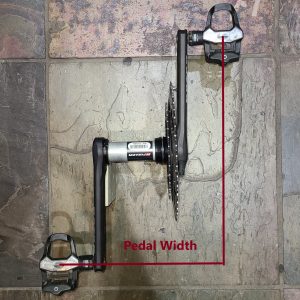 What determines the stance width available on the bike?

There is how far apart your feet want to be in order to happily pedal a bicycle, and then the reality of how far apart the bicycle and related equipment actually puts them.

What if there is a stance width mismatch between body and bike?

Having a stance too narrow or wide on the bike is not something most cyclists are thinking about, and in many cases don’t need to.  But there are enough cyclists out there where an inappropriate stance width is the source of a range of nagging issues or other compensations on the bike.  For a relatively small number of cyclists, they would benefit from a narrower stance width.  A much greater number of cyclists could benefit from a wider stance width than commonly achieved.

Cycling stance width can be a contributor to:

An appropriate stance with will reduce the propensity for injury and increase the efficiency and effectiveness of force transfer to the pedal.

How is stance width assessed?

There is not (that I know of) a good way to quantitatively measure stance width, but it can be assessed qualitatively through a combination of signs and symptoms.

As a fitter, I’m evaluating the cyclist both off and on the bike visually as well as gaining input from the cyclist.

Off bike assessments include:

A fitter may use frontal plane visual aids like vertical laser lines, video or motion capture to get a better look at the movement pattern of the cyclist on the bike. Indicators for taking a closer look at stance width include:

Generally, I like to see multiple signs and symptoms which provide a weight of evidence to make a change to the stance width, rather than rely on a single factor.

What are the adjustment options?

If a change in cycling stance width is indicated, is this a body function correction or a bike equipment adjustment or a bit of both?  This is the ongoing bike fitter’s dilemma and the “treatment” will depend on the training, skill, resources, bias of the fitter, and motivations of the cyclist.

There may be underlying biomechanical issues like hip impingement, or muscle function issues related to strength, activation or mobility that could be assessed and addressed to improve a cyclist’s function on the bike.  This is more likely to be in the domain of a healthcare/medical professional and should not be ruled out by either the cyclist or fitter.

From an equipment and positioning perspective, there are a number of adjustments and interventions that can be applied to effect a change in stance width.  From smallest to largest in effect, these include:

If you just want to eek out a tiny amount of increase in stance width, you can use an oversized pedal washer between the crank arm and the pedal.  Only one of these is recommended per side, so as to retain sufficient axles thread length in the crank arm.  These are typically 1.5 to 2mm thick.

Speedplay have long offered a range of options for pedal axle length.  Under Wahoo ownership, instead of offering rebuild kits, different axle lengths are available in the Speedplay Zero as a special order through an authorized dealer.  (Dealers – you have to contact your inside sales rep to order these).

The standard pedal axle length is 53mm, but longer options include 56mm, 59mm, and 65mm.  There is no longer a shorter axle option for a narrower stance.  Note that these longer axles are not available for the PowrLink model, which has an axle length of 55mm(slightly wider than standard).

Shimano offers their Ultegra SPD SL pedal in a longer axle option, with an additional 4mm of axle length over the standard version.

ISSI offer optionally longer pedal axles in several of their mountain bike / offroad models, although this QBP owned brand may or may no longer exist.

Crank Brothers offer an optional longer spindle (57mm vs 52mm) for their pedal models.  It means rebuilding the pedal with new spindles (axles). Note they call this Q Factor, proof again that there are really no standards and agreed definitions in bike land. 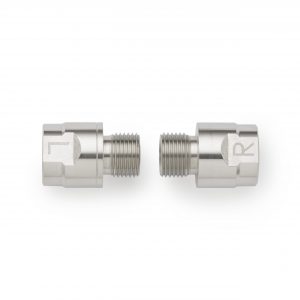 Pedal extenders are an excellent accessory for achieving a substantial increase in stance width.  These machined stainless steel pieces serve to lengthen the pedal axle and place the pedal body further away from the crank arm.  These come as a standard 19mm extension, although some longer ones do exist.  Many people ask why there are not other length options.  Barely anyone needs more, and it is difficult to have less without compromising the strength of the extender, as well as account for variation in the threaded section of the various brands (no standard, again.)  No one wants a pedal to snap off their bike.

The Rolling Stones may not have found it, but you most likely can – at least as far as stance width goes – with some evaluation and experimentation. Some cyclists present as obvious candidates for a large increase in stance width, and pedal extenders are an appropriate solution.  The effect is usually so apparent that it is immediately obvious to the cyclist if they are beneficial or not.  Other cyclists are sensitive to the smallest change, and a couple of millimeters of lateral cleat shift in or out can either resolve or provoke a knee complaint. Keeping track of symptoms and noting equipment or position changes can help identify the sweet spot if somebody is sensitive to adjustments.

If you ride different types of bikes, you might find your stance width works better for you on one type than other, due to the underlying difference in Q Factor.  A road bike may feel too narrow and a mountain bike just right.  This may lead you to increase your stance width on your road bike.  Fat Bikes are well known for requiring excessive stance width, and this is one reason flat pedals are more desirable on this type of bike.  They allow for a greater range of foot positioning and more relief by not being attached to the pedals.

Equipment limitations are quickly met when trying to decrease stance width, but there are multiple options for progressively increasing stance width.  Be willing to give it a go if there are issues to resolve.  You can find pedal washers, pedal extenders, cleat extender plates, and more in our online store.

John is an elite level bike fitter who works with non-elite cyclists – although a few have won races! Many don’t race at all, but ride for fun, fitness, or to compete against themselves. John has worked with 18-80 year olds (and younger and older), novices, age groupers, masters racers and all levels of weekend warrior. These include road riders, mountain bikers, triathletes, tandem riders, tourers, commuters, bike packers and gravel riders and racers. All share a love of cycling and just wanted to ride more comfortably, and in many cases faster. John is the owner of Fit Kit Systems, and provides bike fitting services through BikeFitr (bikefitr.com)